Munich is a very popular destination for tourists, and combined with the city's high cost of living, this means it is not the cheapest place to stay!

While summer is high season, the Bavarian capital is full of visitors throughout the year, whether it's for the traditional Christmas markets come winter, or for Oktoberfest. If you're visiting for the famous beer festival, you need to be booking your accommodation months - if not a full year - in advance, and the prices will still be sky-high!

As Munich has an excellent public transport network, whether you're staying in the heart of the city centre or slightly further out (where prices are likely to be cheaper as a rule) you'll find it easy to get to the places you want to see.

If you're looking for something a little more economical, the area around Karlsplatz and the Hauptbahnhof train station is home to a number of places which strike a good balance between quality and price.

Which district to stay in?

If price isn't an issue, staying in the Altstadt, or Old Town, around Marienplatz, is a great way to feel fully immersed in the history and culture of the Bavarian capital. The majority of Munich's museums, monuments, shops and restaurants, plus half of the Englischer Garten, are located in this district, so you're unlikely to need to use much public transport. It's also within walking distance to the wiesn (fairgrounds), if you're visiting during Oktoberfest. Accommodation here will be the most expensive in the city:

A central neighbourhood to the north of the Hauptbahnhof that is easily accessible by metro, tram and bus from the main transport hubs, Maxvorstadt is home to many of Munich's art museums. Stay here if you want to be near the city centre without paying the highest prices:

This district encompasses the Hauptbahnhof (great for day trips and if you're arriving by train) and the area south-west of the Altstadt. Full of cool coffee shops, gay bars, global eateries and independent boutiques, the Oktoberfest Theresienwiese is also located here, and - added bonus if you're travelling on a budget - there's tons of hostels too.

Other areas of Munich, while further away from the city's main attractions, are not all that much cheaper to stay in, but maybe preferable to you for their atmosphere:

If you're looking for a cheap hostel, this is the site for you 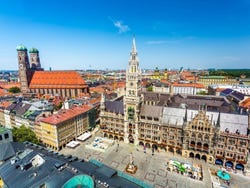 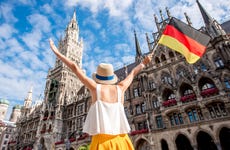