Known as the S-Bahn (Stadtschnellbahn or "urban rapid rail" officially), Munich's urban train network was established in 1972 as part of the modernisation efforts for the Olympic Games. Its eight lines cover almost 150 different stations, connecting the city centre with the airport and Dachau Concentration Camp.

The S-Bahn operates daily from approximately 4:15 am to 1 am, with trains running every 10 minutes in rush hour and every 20 minutes during the rest of the day. At night, trains depart every 20 to 40 minutes. On Fridays, Saturdays and the nights before public holidays, trains run all through the night.

Tickets for Munich's public transport network are the same for every mode of transport. Prices range from €2.90 for a single ticket covering one zone, and from €6.70 for a one-day travelcard around the inner city area. A one-way ticket costs €11.60, but you can purchase a one-day travelcard for €13. Check out all the different options on our guide to Ticket prices and travelcards in Munich.

We recommend planning your routes around Munich on a map of the public transport network. You'll find the main tourist attractions, the airport and both the S-Bahn and U-Bahn lines on this handy map which you can download and save on your mobile device!

The Munich public transport network also has a free app that you can use to plan your journeys around the city: MVV-App. 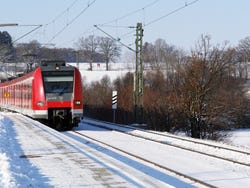