Munich Cathedral, officially "Dom zu Unserer Lieben Frau" or the Church of Our Dear Lady, is most commonly known as Frauenkirche. Built on top of a Romanesque church that dated back to the 12th century, the enormous Gothic-style Cathedral was completed in 1488, with the domes crowning its towers in 1525.

The Cathedral itself is a red-brick construction, and has a very simple design, in part due to a lack of funds while it was being built. It was only in 1525 that its towers - which are easily visible throughout the city at 99 metres (325 feet) in height - were finally covered with peculiar green domes.

Much of Frauenkirche's interior was destroyed World War II, but what survived has been carefully restored, and the Gothic nave, several original stained-glass windows, a collection of 14th to 18th century artwork, and the tomb of Holy Roman Emperor Louis IV are major attractions.

One of the Cathedral's most striking details is the so-called "Devil's Footprint", Teufelstritt in German, a black mark that looks like a footprint, and around which many mysterious legends revolve!

It may not be the most extravagantly decorated of churches, but Frauenkirche's location in the heart of the city centre - and its skyscraping towers - make it unmissable! 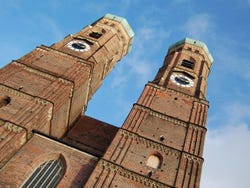 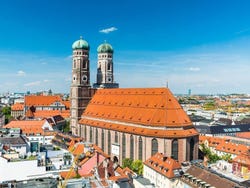