Please note, the Glyptothek is closed for refurbishment until Autumn 2020.

Built between 1816 and 1830 to house King Ludwig I of Bavaria's personal collection of Ancient Greek and Roman sculptures, the Glyptothek is an attractive museum located in an elegant Neo-Classical building that perfectly suits its contents.

Envisioning Munich as a "German Athens", then Crown Prince Ludwig ordered the construction of the Königsplatz, an elegant square of Classical-style buildings housing the Glypothek, or Sculpture Musuem, and the Staatliche Antikensammlungen (State Collection of Greek and Roman Antiquities). The Köningsplatz is also home to the Propylaea, a Doric Order-style city gate constructed in the mid-19th century.

The Glyptothek quickly became one of the greatest collections of Greco-Roman sculptures of its time, however, during World War II it suffered destruction to its exterior architecture as well as to most of the frescoes that decorated the interior.

The museum is home to a wealth of sculptures dating from 650 BCE to 550 CE, amongst which a selection of highlights include the Munich Kouros, a grave statue of a young boy from Attica and temple figures from Aphaia in Aigina dating from Archaic Greece; the portrait of Homer and the Medusa Rondanini from Classical Greece; the Barberini Faun from the Hellenestic period and an extensive collection of Roman busts.

The Glyptothek's collection perfectly complements the terracotta and bronze works showcased in the neighbouring Staatliche Antikensammlungen, also located in Köningsplatz.

Munich's Glyptothek is well worth a visit for those interested in Ancient Greek and Roman art and history, as well as for anyone who has plenty of time to spare in the city. It makes for a great combined visit with the other nearby museums in the Kunstareal, or "Art District", which comprises the Alte Pinakothek (14th to 18th century art), the Pinakothek der Moderne and Brandhorst Museum (both contemporary art) and the Schackgalerie, or Sammlung Schack (19th century German art). 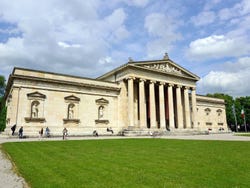 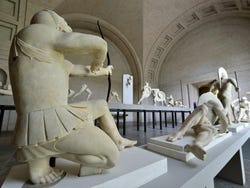 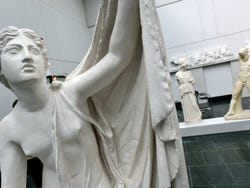